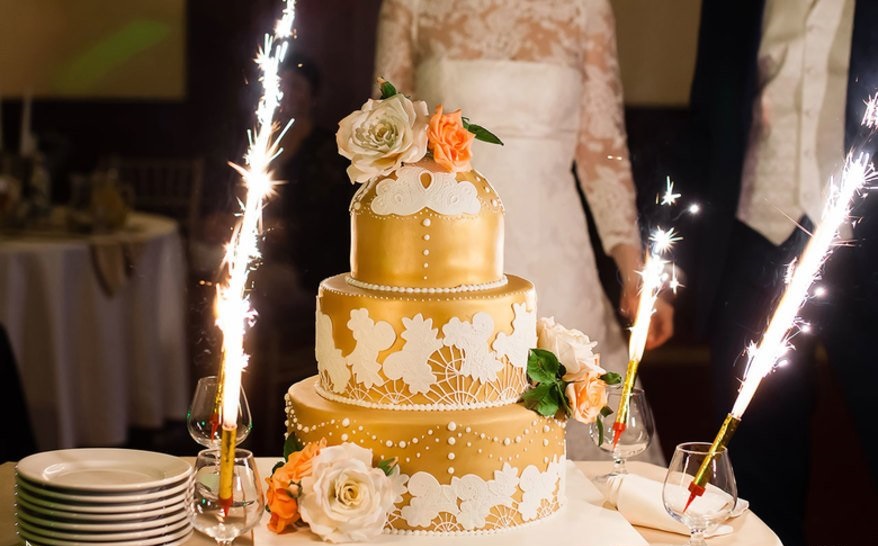 If we set aside the conventions, the history of the wedding cake is at least five thousand years old. Only instead of a cake originally was a ceremonial bread. In ancient Rome, it was baked equally from wheat and barley flour. The custom was for the bridegroom to break the bread over the bride’s head. He distributed the slices to the guests, and the crumbs in the bride’s hair were scrupulously gathered and eaten with her.

In ancient China, the groom’s family baked four cakes at once. During the ceremony, they were tossed in the air and caught with a blanket. If all four pies safely reached the goal, family happiness and prosperity awaited the young family. By the way, during the ritual the bride had to recite poems about marriage, thus marking her transition from one family to another.

The Anglo-Saxons in the Middle Ages were content with small round buns. They were stacked in a pile, thus symbolizing abundance and the young family’s aspiration to the top. In the 17th century, the French borrowed the idea from the British and transformed the shapeless pile of pastry into an elegant croquembouche cake. Smooth, creamy balls were assembled into a high pyramid, decorated with fruit, nuts and candied flowers.

It is believed that the traditional, as we know, tiered cake appeared in the XVIII century through the efforts of a London grocer. According to legend, he received an order with a request to make something out of the ordinary. The confectioner was painstakingly trying different ideas and could not find a suitable one. One day, walking down Fleet Street, he absent-mindedly looked at the building of St. Bride’s Church with a majestic bell tower in several tiers, and it dawned on him at the same moment. A few days later, the original wedding cake was born.

Today’s wedding cakes are true works of cake art, capable of striking anyone’s imagination. According to established custom, the main color of the wedding cake is white. However, deviations from tradition occur very often. Moreover, each color has its own meaning. Red represents undying love, pink – healthy and strong offspring, green – financial well-being, orange or yellow – the strength of family ties, blue – stability in relationships, purple – the rapid achievement of goals.

No wedding cake can do without all kinds of volumetric decorations of marzipan and multicolored mastic. Here is where confectioners show their imagination and skill in all its glory! Let’s see the most popular ideas. Flowers, mostly roses, symbolize deep, warm feelings, which should increase over the years. Only the buds must be free of thorns, otherwise frequent discord in family life is unavoidable. Hearts in all variations embody loyalty, mutual understanding and willingness to help each other in difficult times. Often they are complemented by a pair of gilded rings, intertwined with each other – a symbol of infinity. A pair of blissful swans or doves is another romantic embodiment of devotion and pure mutual feelings.

Many newlyweds prefer to decorate the cake with all kinds of figures, from the traditional bride and groom, ending with their favorite characters from movies and cartoons. Some confectioners turn cakes into whole compositions with subjects not devoid of a good sense of humor. So, on one cake, you can easily see the bride dragging the groom on a leash, and on another – the groom is trying to shove the bride off the top tier.

So quietly we came to the most practical question – how to choose a wedding cake? Tips from professionals will help determine the right decision and avoid embarrassing mistakes. The weight of the cake is chosen on the basis of the number of guests and the calculation that each has a portion of about 150-200 grams.

How to choose a wedding cake

The most win-win option is airy sponge cakes. Just keep in mind: if the cake is intended to be multi-story, the upper tiers can squeeze the base and it will sag. In this case, it is better to make the “foundation” nut or honey. Alternatively, you can use tiered bases – a dish for each cake.

The so-called naked cake remains a hit of recent years. This is a cake with no or minimal cream coating. Due to such a move, the cakes and filling become visible, which looks quite unusual. For effect, more filling is often added, and the cakes themselves are decorated with fresh fruit and candied flowers.

Watercolor cakes, on the other hand, are characterized by an artful covering with intricate decorations. They can be decorated with multicolored streaks, as if made with real watercolor, and even drawings in the spirit of different art movements.

If ordinary cakes seem like a trivial idea to you, replace them with a tiered wedding cupcake stand. This trendy idea is in particular demand today. They can be decorated in the same style, especially if the wedding ceremony has a themed concept, say vampire or space. You can order cupcakes with individual decorations for each guest. This option is good for a small wedding.

Perhaps the wedding cake is associated with the most customs and superstitions. It is believed that it must necessarily be round. Sharp corners are fraught with constant quarrels and conflicts. The bride and the groom must cut the cake together: she takes the knife in her hand, and he supports her with his hand. According to the omen, if the man does the job alone, the family will be childless.

Who gets what piece of cake?

The first piece of cake is due to the newlyweds, the next four to their parents. And only then you can move on to the other guests. In the modern tradition, the first piece is put up for a symbolic auction among the invited guests. The proceeds are immediately deposited in the family’s goblet and kept as a pledge of wealth and prosperity.

It is not uncommon to put a ring in the wedding cake. If it is found in the piece of a single girl, it means that soon she will get married. You can also find out about your lady’s happiness in another way. To do this, you need to wrap a small piece of cake or crumbs in a napkin and put under the pillow. According to the belief, that night the soulmate will appear in a dream. Sometimes in a wedding cake instead of a ring you can find a coin, a clover leaf or a tiny horseshoe. These are all symbols charged with good luck.

Wedding cakes are a separate genre of confectionery art that cannot leave anyone indifferent. These exquisite masterpieces are worthy of admiration only because the real masters put into them all their talent, warm skilled hands and part of the soul. And what wedding cakes have you ever tasted? Perhaps you know the superstitions and traditions connected with them? We’re waiting for your sweet stories and prophecies in the comments.